Rhiza invites you to FEEL VIA VIBRATIONS the communication between THE mycelium and oyster mushrooms. 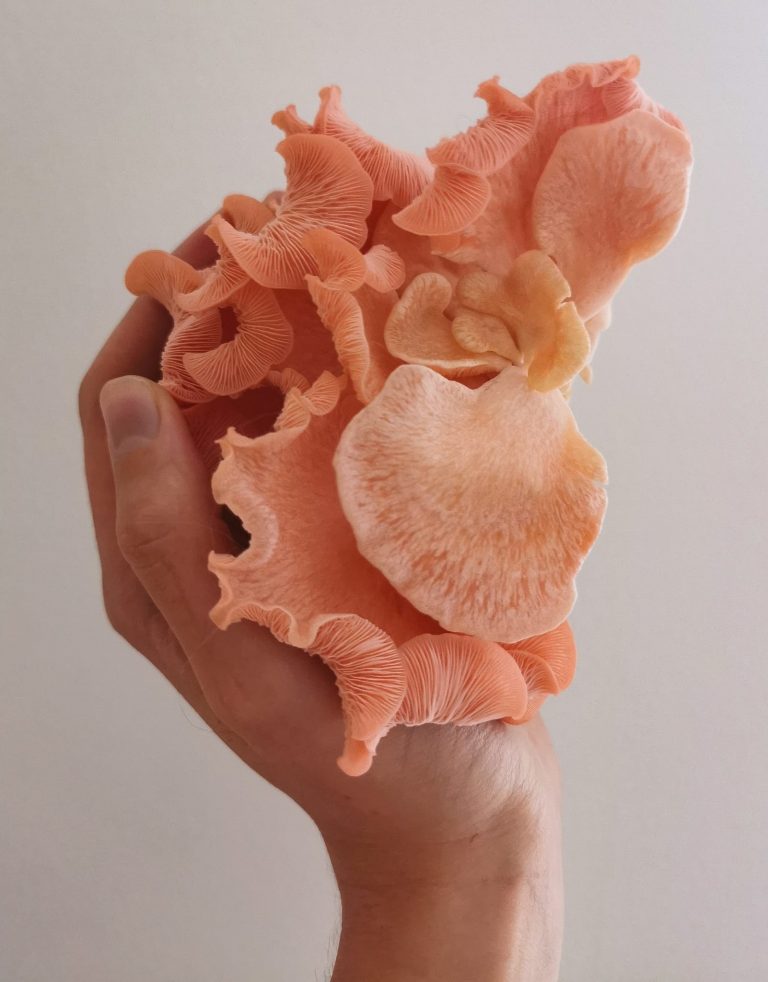 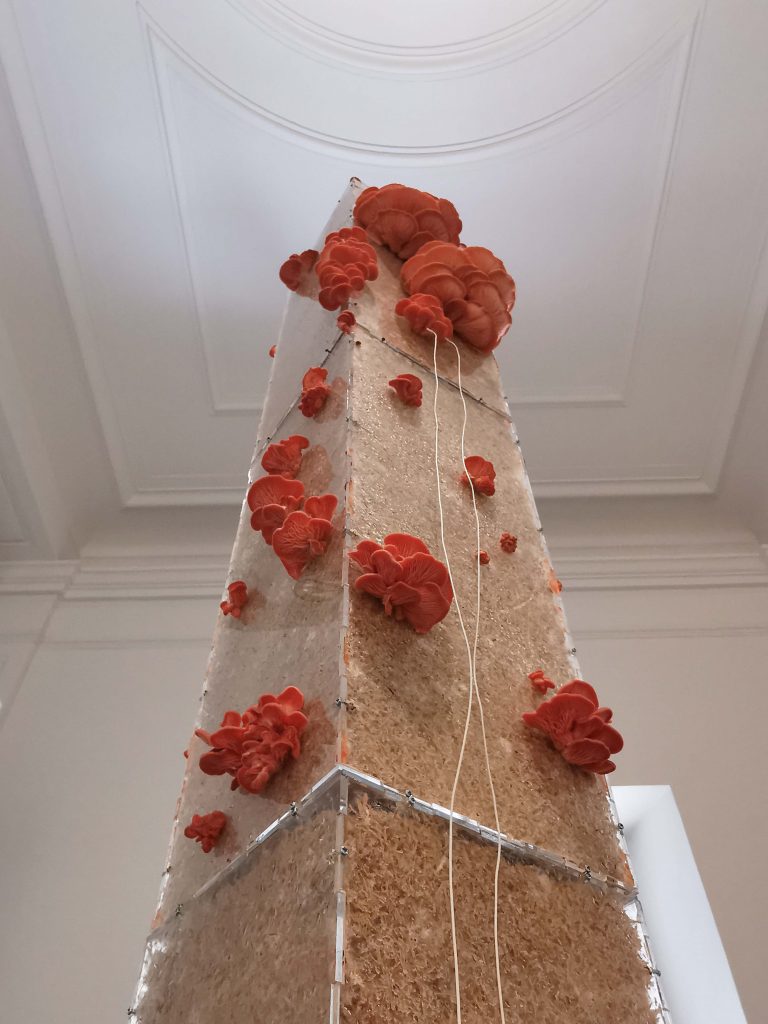 RHIZA is an interspecies connector that invites you to become part of the communication between her mycelium and oyster mushrooms. The tower’s oyster mushrooms and mycelium continuously exchange biodata through electrical signals. These electrical signals are picked up by the biosensors and translated into vibrations you can feel by standing bare feet on the mycelium floor-pads.

Rhiza emerged as an aspiration to enable human beings to transgress their own species and connect with otherness in a multiplicity by experiencing their connectedness. The visitor will experience what it means to be part of the mycorrhiza on the level of perceptive and physiological. A mycorrhiza is a form of cohabitation between roots and fungi. In Rhiza, which means roots, the visitors are integrated into the human-mycelium-mushroom interface through their own roots, their bare feet. Our biggest organ to sense the outer world, our skin, is connected with the mycelium’s oscillations produced by electrical resistance. This hybrid-electric resistance and pulse sensation are transferred back to the human body via tactile sensory impulses. Such symbiotic connections are an embodied way to integrate human beings into the network of their environment through their kinesthetic empathies.

Rhiza is inspired by the interaction within mycorrhizal networks. This underground network of fungal connections exchanges back and forth between fungus and one plant and neighbouring plants, using fungi as a thoroughfare. As the fungal threads spread, they create webs known as ‘common mycorrhizal networks’. Through these networks, plants and fungus can exchange sugars, nutrients, water and more. These shared mycorrhizal networks embody the most fundamental principle of ecology: that of the relationship between organisms. Via RHIZA, I am researching the possibilities of creating an empathic relationship between humans and non-humans. Rhiza aims to create an awareness of being part of a bigger network. Namely, a way for humans to be aware of the communication and sharing of information outside of the human realm. Since “the human being” is no longer seen as the centre but as part of a comprehensive and complex system. The pandemic and current natural disasters have highlighted once again that we need to start living in coexistence and symbiosis with natural landscapes rather than dominating or exploiting them, as is common in many western societies. What impacts nature also impacts us, humans.

RHIZA offers space to reflect and experience what these symbioses entail. To think and feel what it means to be part of the complex network we live in and that we can also listen to other systems instead of taking them over. Experiencing the complexity of the mycorrhizal network with their subtle blend of cooperation and conflict can be seen as a metaphor for how we relate to each other and our social systems. Just like human society, this society is characterised by variety, with its capacity to help, hinder, cooperate, and exploit. Nature is built on connections, and so are we. 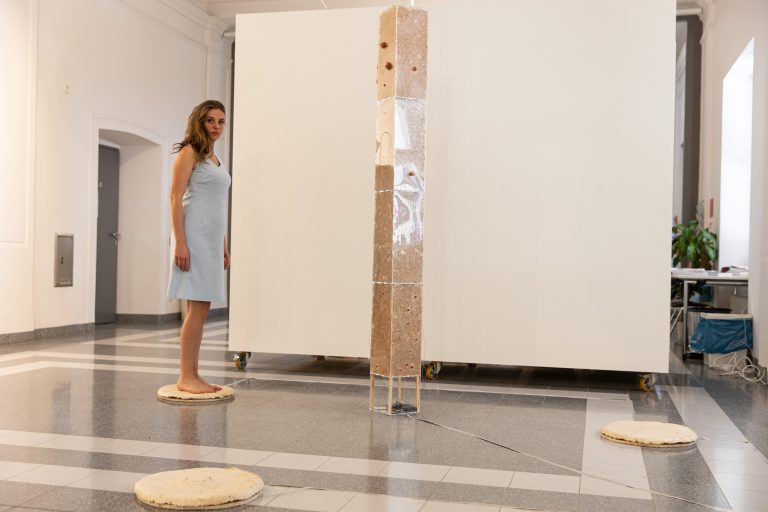 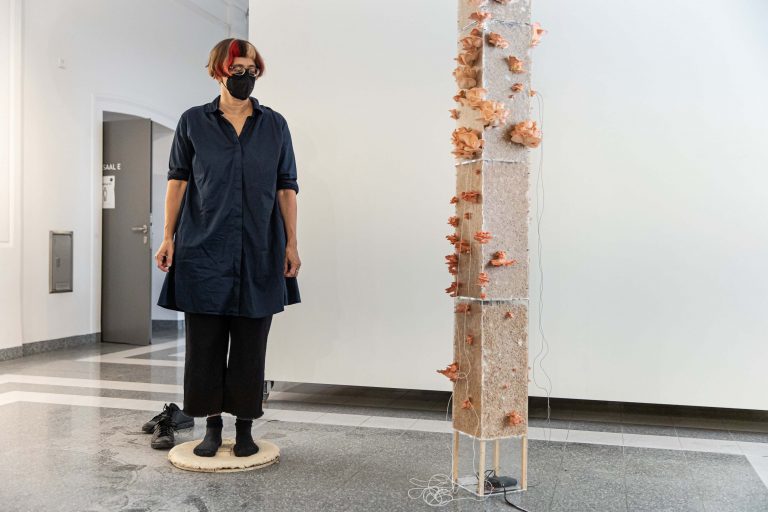 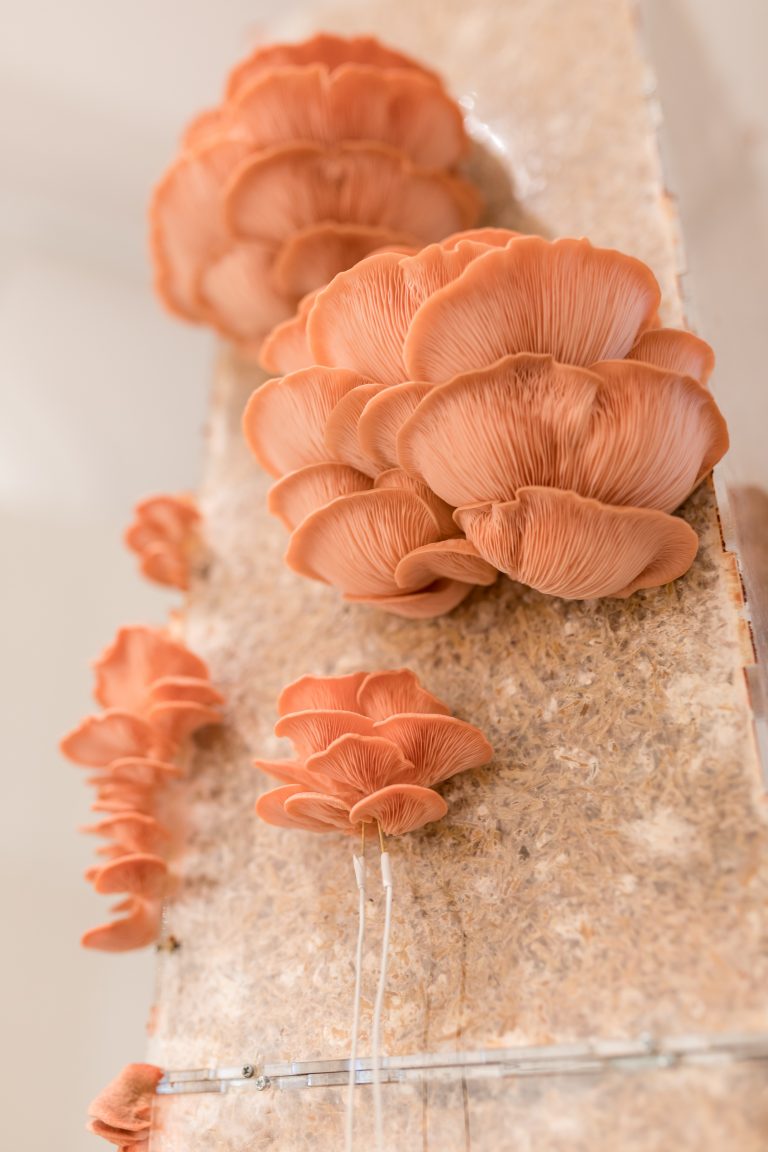 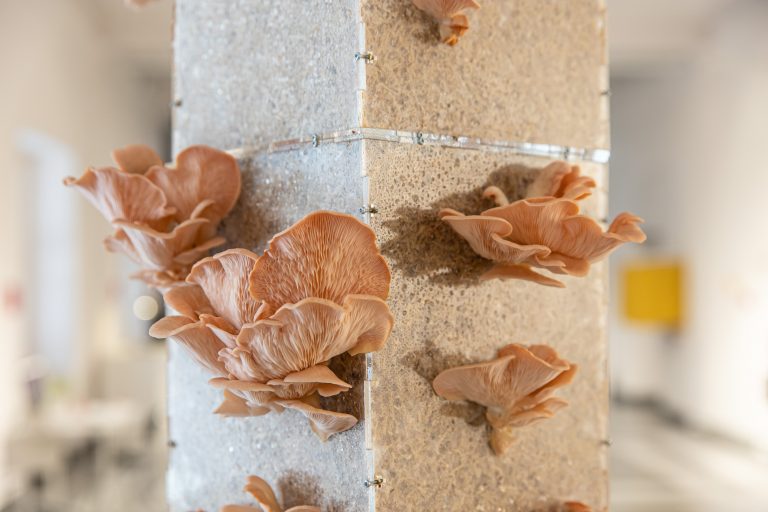 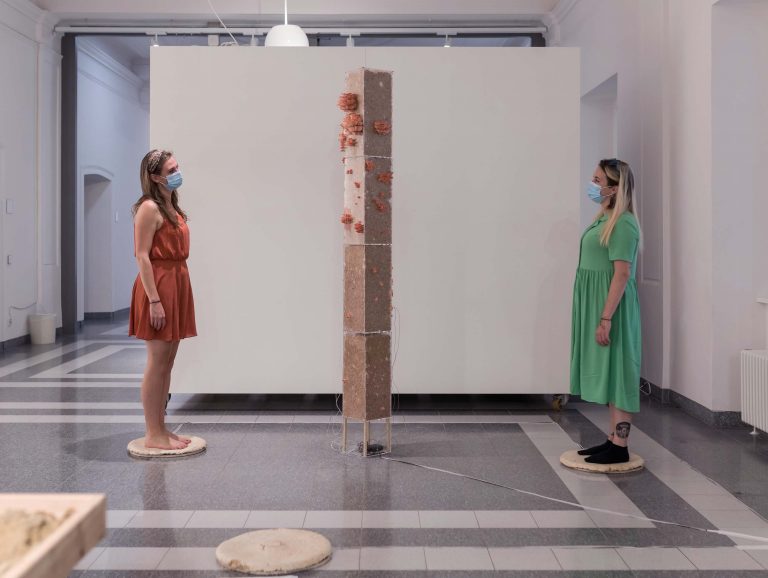 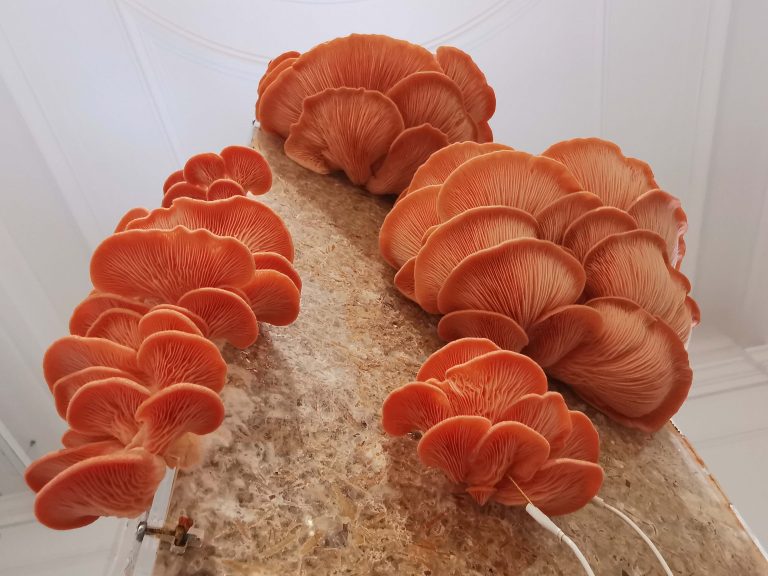 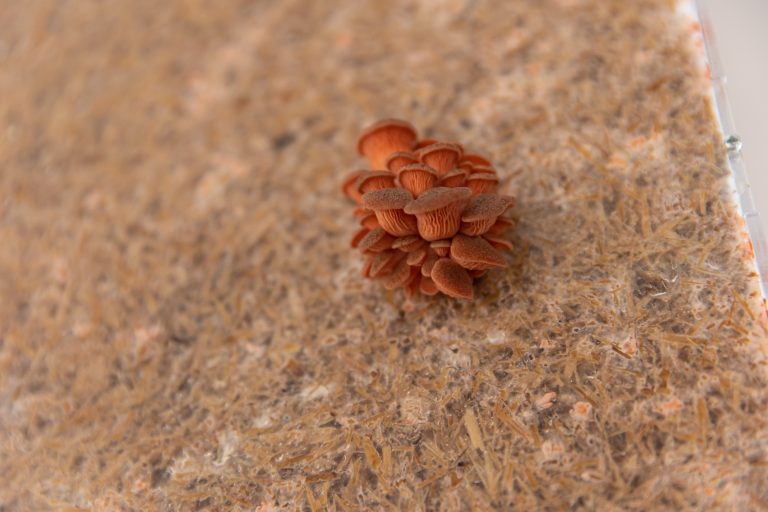 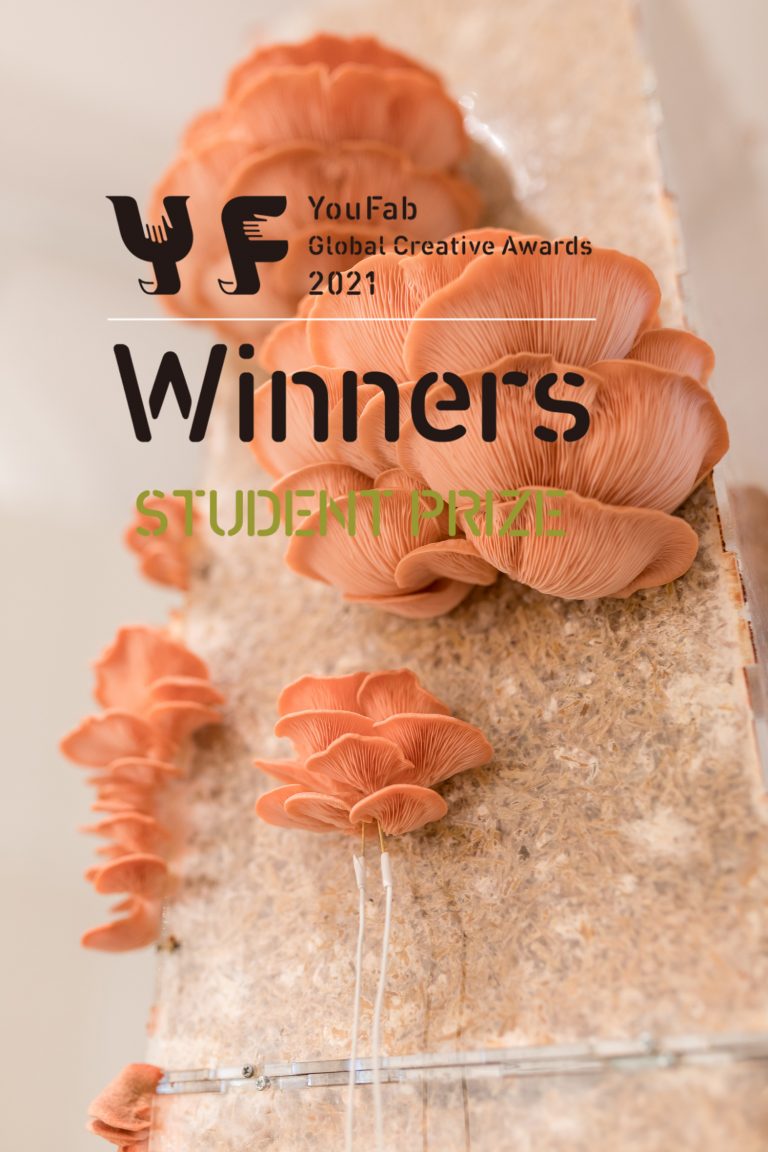 Go Top
Studio Stenfert Kroese is using cookies to ensure that we give you the best experience on our website. If you continue to use this site we will assume that you are happy with it.Ok